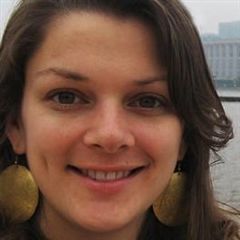 Graduating Class: 1996
Current Position: Asia Regional Sustainable Design Leader at Gensler
Current Location: Shanghai City, China
Education / School 1: Yale University
When I first got to Shanghai I almost thought I’d accidentally moved to New York. In fact my temporary serviced apartment, aside from being absurdly large and slick, is right behind a massive mall and office complex called Shanghai Times Square—complete with Gucci, Zara, Starbucks and McDonald’s. There are parts of town where you can’t throw a rock without hitting a gourmet restaurant serving steak tartare and moule frites, or sandwich shop boasting a daily panini and smoothie combo. The streets are busy, of course, but no more than New York and certainly nowhere near what I expected. Where are
these 1.4 billion people I hear so much about?

I’ve had the good fortune to travel a lot, but until now the only big
city I’ve spent much time in outside of Europe and the US is Mumbai. Mumbai is a whole different world, full of people and cars and animals crushing into every inch of space. There are sounds and smells everywhere and you can’t go 3 feet without a sharp reminder that you are very, very much abroad. To be honest, I expected a little more of that in Shanghai. I expected to get jostled in the streets and to be woken by honking busses at 3 a.m., for the traffic to ignore lane lines and for the air to be heavy with smells. In short I expected to be hit over the head by the fact that I’d moved to China, and I expected the feeling to be
inescapable.

Instead I felt immediately at home. As it turns out this city has been much easier to handle than I expected. Yes, most things are in Mandarin, but after asking around at work and leafing through my phrase book I can usually come up with whatever I need. With 3 dozen expats in my office there isn’t a problem I could have that someone else hasn’t dealt with before. Barely a day goes by without someone, knowing I’m new to the city, stopping by my desk to see if I want to go to lunch, or dinner, or an exhibit with whatever group is getting together that day. Not only that, but there is no better excuse for calling friends of friends of friends you’ve never met to go out for coffee than that you’re 6000 miles from home and don’t know a soul in the country. I’ve been here a month and I haven’t felt alone or out of place once.

In all fairness this is really only one side of the story. I’ve seen some quirky things here, and I love it when I do. I’ve seen an old man in a full set of plaid pajamas walking a cat midday in the park. I’ve had to walk to work in the middle of the street each day because the sidewalk is used entirely for motorcycle parking (parking which is kept very orderly by the not particularly official man in the folding chair selling tickets). I’ve sat with my landlord for 40 minutes while we counted out 4 months worth of my rent in 100RMB (~$15) notes since my landlord, like many others, only accepts cash. I’ve seen a family of twelve eating dinner at an enormous round table that a restaurant was kind enough to move to the middle of the sidewalk for them. I’ve watched window washers rappel down a 30-story building on a single rope, bucket and squeegee in hand. I’ve had lunch for 12 cents and dinner for 30, and I’ve resisted the $12 box of Cheerios. There are certainly things here you don’t see in the states, but it’s not quite as
overwhelmingly foreign as I expected.

Oddly enough, what I’ve found more startling than the Chinese
aspects of Shanghai are the European ones. The expat community here is enormous, and has been present for so long that it has integrated itself into the city and its history. Everything from the food to the people to the architecture is a hodgepodge from around the world. There are often conversations going in 4 or 5 languages in the office simultaneously, with everyone finding whatever common language they are most comfortable in. Though most everyone speaks English, many people are more comfortable in Mandarin, Shanghainese or French, and a smattering of other European languages can be heard occasionally. French, in fact, seems to be by far the most common non-Asian language here aside from English. I couldn’t be more excited about this, and I’m already getting made fun of in the office because I’ll talk to pretty much anyone, anywhere, as long as they’ll talk to me in French. After enduring years of the typical Californian rebuke “Why on earth did you learn French when you could have learned Spanish?” It’s both validating and simply fun to be somewhere where I can put this language I love to daily use.

I came here for a lot of reasons. I wanted a drastic change and a big city adventure half way around the world. I wanted challenge in my everyday life, and to live outside my comfort zone. Being an architect, I wanted to work in the city that builds some of the biggest most staggering skyscrapers in the world. The Shanghai office of my firm is currently working on a tower nearly 700 meters tall—so tall you can’t see the ground for the clouds some days—and I wanted to touch the project, even if only a little. I wanted to live abroad, just to see what it was like, and I wanted to try the “expat experience” first hand.

So far I’ve found some of this in Shanghai, and some of it I haven’t. For everything I was looking for that I didn’t find, though, I’ve found something just as good that I never thought to expect. Shanghai hasn’t yet proven quite the drastic change and constant challenge I expected, but it is showing itself to be a city I could love.
Back