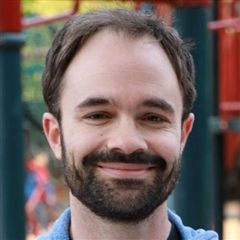 In February of 2008, Andrew Hasse ('95), my good friend since the age of four, gathered several of his old friends together to tell us he had a golden opportunity to make a meaningful film, and
that he wanted all of us to be involved. Some of us had backgrounds in film, but the rest had more experience in areas like music, graphic design, linguistics, sound design, and politics. He told us he’d been flirting with the idea of a production company for years, and that for a variety of reasons, now was the perfect time. And so, East Bay Pictures International was
formed.

The initial project was a feature-length documentary on climate change, based on a recent controversial book called Break Through that sought to re-frame the issues as economic opportunity rather than the typical doomsday approach seen
in much of the media. Other projects came to the table, including a horror film and a comedic web series about young wizards in the year 2050. Eventually, a short piece on urban farming, meant as a means to familiarize ourselves with a type of film that none of us had much experience with, was suggested. Initially, it was intended to be nothing more than a brief sketch of the local culture of urban agriculture, a portrait of the characters,
motives, and ideals involved, and a way for us to get our feet wet in the medium of documentary filmmaking.

But as we explored the world of urban farming, and as contract negotiations and other pre-production red tape on Break Through slowed to a crawl, Edible City gradually became our main focus. Visits to local community gardens, school pro-
grams, conferences, a rehabilitative program at San Quentin, among others—as well as interviews with farmers, community leaders and experts—have propelled Edible City to become the focus of the company. The urban farming community, and the food security movement as a whole, is gaining traction in a broken economy and an unsure future. Coming to terms with several basic facts—from dwindling fossil fuels to a constantly
worsening food crisis—we began to feel (as we always had with Break Through) that it was a film that needed to be made. In the end, the local subjects we’ve found for Edible City are extremely relevant to the larger issues of climate change and sustainability, and our intention is to give a comprehensive view of the model
system that is growing in the Bay Area.

EBPI consists of, among others, Andrew Hasse, Chris Woodard, and me, all graduates of Ecole Bilingue’s 8th grade class of 1995. Other EB collaborators have included my sister Katy, who will put her degree in fashion design to good use in future projects; Julien Raffinot (’96), currently residing in France but lending his
skills as an actor and artist whenever possible; and Alex Foster, who has helped with contract negotiations from New York. Still others have helped creatively and with fundraising events (including Marian Acquistapace, ‘96). Many of us met around
the age of four, and our lives have intersected numerous times through the years, and have now brought us back together
in a creative, collaborative setting. We were all, to some degree, fed up with desk jobs and the nine to five, and decided to
essentially try an experiment: can we make meaningful movies, as a viable company, with our best friends? The answer, thus
far, has been a resounding yes.
Back