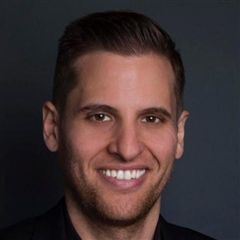 Graduating Class: 1992
Current Position: Creative executive at Gold Circle Films
Education / School 1: UC Santa Cruz
When I was at EB, I was more interested in drawing comic books in class than in learning French, which did not endear me to
my teachers, who generally viewed me as a trouble-maker and a clown. Nonetheless, I came out of EB speaking some French, and
surprisingly, both the comics and the French have intersected in unexpected ways since I left EB.

After I graduated from UC Santa Cruz, I worked as a comic book editor for a year. I then worked at a talent agency, assisting an
agent for a year. Then I landed a job assisting the movie producer Scott Rudin. During this time, my knowledge of French kept me gainfully employed. Rudin has six full-time assistants, and the average turnover is less than four weeks—it’s quite a demanding
environment, and my prospects (or those of anyone else) were not great.

My first week, I was assigned the task of drafting a list of all of Rudin’s favorite Parisian antique stores, including their cross streets and hours of operation, spelling it all perfectly (one error could have gotten me fired—it sounds exaggerated, but it’s not). Most of these boutiques were not listed on the internet, so I had to call the storekeepers, many of whom didn’t speak English, and scrupulously copy down all the pertinent info. Upon getting Scott his list, he told me I did a “great job,” words exceedingly rare coming from his mouth.

Getting on Rudin’s good side opened numerous doors for me—I was hired at Universal Pictures, which would have been almost
impossible, coming from New York, without his endorsement.

Now I’ve graduated from assistant at Universal to creative executive at Gold Circle Films, the company that made My Big Fat
Greek Wedding. Currently, my full-time job is helping produce movies, finding good scripts, emerging writers, directors, and actors, and helping put it all together into successful films. It’s a job I feel lucky to have, and one that I enjoy. It was not easy to climb my way through all those jobs; I was hazed, and this is a highly competitive industry, so I had to jump through many hoops.

France is the Mecca of the comic book world, so now that I’m beginning to travel, searching for ideas for films, I’m reading more French comics, and I might attend Angoulême—the largest comic book festival/convention in the world, which is in France. There are French film festivals, French production companies that develop interesting and unique projects, and French filmmakers that we work with. My limited knowledge of French is helpful in my work, allowing me to network with talented artists and storytellers who otherwise might go undiscovered in the U.S.

The French I learned at EB has been useful in my career. Now that I’m searching for French comics to turn into movies, maybe all those comics I was drawing while in school weren’t a waste of time either.
Back