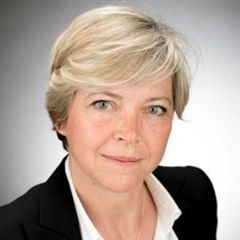 Graduating Class: 1983
Current Position: To develop the firm's international M&A and private equity transactions at law firm Duteil Avocat
Education / School 1: La Sorbonne (Paris)
Here is an article from Delphine who only went to EB for one year. Her younger brother (Adrien, Class of 1987) went to EB for many years. Their mother was on the Board of Ecole Bilingue.

I was eight years old when my family moved from Annecy (South East of France) to San Francisco. I did not speak a word of English and therefore went to the French Lycée in San Francisco.

We rapidly moved to Berkeley and I discovered EB in fifth grade. I remember, on the first day, our French teacher saying “There is a
new French girl amongst us now, her name is Delphine” and I was thinking while being stared at: “Oh my! I hope someone speaks French around here!!!!”

Of course the kids spoke French, they were almost all bilingual! I was very much encouraged in improving my English by Jan, our English teacher; she was always very positive “Great
progress! Wonderful! You’ve improved so much!” I had a lot of happy faces on my notebook although my essays were full of spelling mistakes and grammatical errors...! She really did
help a lot! Everything went very fast: I felt integrated in no time, made great friends and soon preferred speaking English than French. I even volunteered to be “Annie” (the main character) in the play we were to act in front of all the parents. I ended up
being the maid, though...my English accent was probably not good enough!

Wonderful souvenirs which were due to the teachers, the students, everyone at EB I guess! Unfortunately, I spent only a year at EB as there was no middle school. I then attended the French American International School in San Francisco, as well as most of my EB friends. I moved back to France (Paris) when I
was 14, in tenth grade. I then studied law at Sorbonne Paris, succeeded in the French bar exam in 1996, and became a lawyer specialized in mergers & acquisitions/private equity. Since the beginning of my career, I have worked, in majority, on international transactions (e.g. foreign clients purchasing French companies). I started out in an English law firm (Freshfields Paris) for 3 years before my husband and I decided to move to Lyon, located in the South East of France, close to the mountains! My
husband found a job in an investment bank and I joined the law firm Soulier (well known for its foreign clients, mostly Americans) and worked there for 31⁄2 years. I am now working (still in Lyon) for the law firm Duteil Avocat where my task is to develop the firm’s
international M&A and private equity transactions (through, in particular, the search for an active international network of lawyers, whether existing or to be created).

I am particularly attached to the “international” aspect of my job, which no doubt comes from my 6 years experience in San Francisco. I would love it if my daughter Elise (21⁄2 years old), with whom I speak English, had the chance to live the same experience as mine at EB. Receiving a bilingual education clearly opened my mind and helped me understand better other cultures and attitudes. Maybe an opportunity will show up one day...!?

In the meantime, I am coming back to San Francisco next September, one of my best friends from EB is getting
married... I just can’t wait to meet with my old friends!
Back