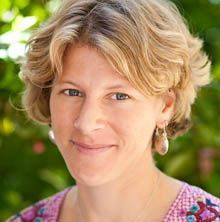 Graduating Class: 1986
Current Position: Environmental Social Science Research Fellow at Environmental Change Institute (ECI), University of Oxford
Current Location: Oxford, Oxfordshire, UK
Education / School 1: University of East Anglia, Brown University
My mother is Swedish and my father American, I am married
to a German and live in Thailand. When people ask me where
I am from, although I have two passports, I usually try to avoid
answering the question. This is because I am not just Swedish,
American or an “expat” but part of me also identifies myself as
“from Berkeley” and even a little part of me would say “sort of
French”. Then they say: “French?! How can that be?” “Well, I
went to a French school from the age of 5.” The next question
is usually “Why?!”. I usually try to avoid answering that as well,
because my French “identity” is actually more of a consequence
of how strongly my formation was influenced by going to Ecole
Bilingue, which was a choice my parents made for me not
because they wanted me to “become French”, but because they
recognised what a unique education I would get. An education
that would carry me far, it was hoped—and indeed for now it
certainly feels that this hope is being fulfilled.

I went to EB from first through fifth grade, graduating in 1986.
I recently found my graduation speech, which thanked EB, all
the teachers and students for being so wonderful. I had moved
to London before Christmas of my final year at EB, and had spent a few months in a school that I didn’t enjoy very much, to put it nicely. I came back for graduation because my parents understood how much I had benefited from being at EB, and how important it was for me to be part of my class once again, if only for a few days.

After returning from England in 1987, I went on to the
French-American International School in San Francisco,
because I still felt that I needed to build on the education
that I had gained. By this point I had no doubts that the level
of discipline and dedication necessary for a French education
were necessary for me to function well—I had experienced
undisciplined students and a poor curriculum in London,
and knew that I didn’t want to go through that again. I will
never forget my shock at how the teachers in London didn’t
care what colour pen you wrote in, nor whether you under-
lined correctly or even did your homework at all!

After finishing my International Baccalaureate at FAIS, I ended
up at Brown University in Rhode Island, for the first time experiencing an “American” school, but obviously not a typical one. Because of my international upbringing and education at EB
and FAIS, I had always been interested in international issues,
and global environmental change was one that I felt was extremely important for international cooperation. My passion for
environmental issues bloomed at Brown, and I graduated with a
Bachelor of Science in Environmental Science, just as the Kyoto
Protocol was being agreed at the end of 1997. Because of my interest in climate change, I went to work at the UN Framework
Convention on Climate Change secretariat in Bonn, Germany,
in March 1998. It was there that I found out what I wanted to
do with the rest of my life—professionally and personally. On
my first day entering the UN building, I didn’t have the right
ID with me, so the German security guard behind the counter
asked me for my driver’s license. Never having seen a California
license before (in colour), he managed to memorise my birth-
day, which came in handy on our first date two months later.
We have been together since that time, and have been married
since August 2006. Markus is a web developer and a photographer, passionate about marathons and dreaming of doing the Iron Man in Hawaii one day. Coming from a background that contrasts almost 180 degrees from mine, we never seem to run out of things to discuss and even argue about!

At the UN in Bonn, I realized that what I was really interested
in was working with environment and development, so after a
year in Norway working for the UN Environment Programme,
Markus and I moved to England in October 1999, where
I began studying a Master’s of Science in Environment and
Development. My focus was on adaptation to climate change,
and after finishing the degree, I decided to stay in England and
continue to work on the topic as a doctoral student. Little did
I know that this would become the next big topic in climate
change!

In 2001, the internet boom went bust, and Markus found
himself wanting to move back to Germany. So a few days after
September 11, we packed our belongings in our east London
house, and drove to Germany. I continued to work on my
Ph.D., and Markus worked for a small company outside Frankfurt that quickly also went bankrupt. During that time, I was in
El Salvador doing my fieldwork, and Markus found a new job
in Düsseldorf. We moved there for two years while I was writ-
ing up my Ph.D., which was finally finished in July 2004. In
February 2005 we moved to Sri Lanka for two years of extreme
expatriate living, complete with cockroaches and cocktails, and
periods of significant insecurity. I had a post-doctoral fellowship
working on agriculture, water management and livelihoods,
and Markus worked for a research project. We finally made it to
Thailand in February 2007, and I believe we will call Bangkok
home for at least another few years to come.

In October 2007, the weather in Bangkok was improving—it
got cooler and drier. One day, while working from home, I
suddenly felt a familiar feeling. I lay down on the floor of the
workroom, and realised that I was having a serious Berkeley
flashback. It occurred to me how much I missed Berkeley, how
much I missed the smell of coffee roasting as we played in the
EB playground, the sound of the private aircraft that fly over
north Berkeley on weekends, the smell of eucalyptus trees, the
hot asphalt under my feet as I run down the stairs of our house
to see if the mail has come, and all the Berkeley institutions that
I had just taken for granted when I was younger—Peet’s coffee,
Zachary’s pizza, all the fantastic bakeries, the Cheeseboard, to
mention only a few!

I decided to spend March 2008 in Berkeley. As it happened, I
had to come to Central America for some fieldwork anyway,
but towards February it became clear that I had to be in Tanzania the second week of March, which I had planned as part
of my 3-week Berkeley bonanza. So the bonanza became two
weeks, but I still enjoyed it more than ever, soaking in as much
of Berkeley as I possibly could! Driving around the EB neighborhood was one of the most important parts of “fuelling my Berkeley tanks”. Remembering all the friends, catching up with some of them, walking around and looking at the houses—remember who lived here, there, across the street?

Often, people will tell me that I am a global citizen. Although
it sounds like a cliché, it seems accurate—yes, I speak many
languages (trying to add Thai as my 6th one but finding it very
challenging!) and yes I have travelled all over the world. But I
think what really lies at the heart of being a ‘global citizen’ is
attitude—about being part of a bigger picture, and respecting
that it is possible to venture beyond our own social and cultural
backgrounds to accept other ways of being, thinking and doing.

PS. What’s this about sticky rice with mango then? Well, you
take a sweet mango—the yellow-skinned kind with the velvety
soft texture that just melts on your tongue—and to that add
sticky rice and a sweet, thick coconut sauce. It’s a Thai traditional dessert—and although the health freak in me says no! the
Berkeley gourmet says bring it on!
Back