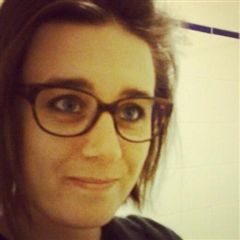 Graduating Class: 1999
Current Position: Multimedia journalist, researcher, translator (English-French-Arabic-German)
Current Location: San Francisco Bay Area, CA
Education / School 1: Columbia University, Institut francais du proche Orient, Institut d'études politiques de Paris
I graduated from EB almost six years ago. It certainly doesn’t seem like that long ago. I keep in touch with a half dozen or so of my closest friends from my class. As an only child, they are the closest I will ever get to siblings.

After EB, I attended Lick-Wilmerding High School in San Francisco. I didn’t know anyone else in my freshman class. I am not particularly outgoing, or at least I wasn’t when I was 14. To be honest, I never really made much social headway in high school. I didn’t feel like I could relate to the San Francisco kids, all of whom knew one another the way I would have known everyone if I had gone to Head Royce, CPS, or Berkeley High. Through the four years at Lick, I only made one great friend. Nine years spent developing relationships at EB made four years sound like a joke. To a certain extent, I do think that I am more strict than most when it comes to calling someone a friend.

Going to the school in San Francisco, most of the social life was there as well. Thus, few of my classmates spent much time in the East Bay; even fewer saw my house or met my parents. How much can you understand someone if you never see where they come from? It was no coincidence that the people I was closest to were all from the
East Bay. I rode BART to and from school with them every day. We knew the same people from Middle School dances. Although I had some terribly lonely times at Lick, going to school in San Francisco enabled me to become familiar and to navigate what really is a beautiful and amazing city. To a certain extent, it also prepared me for the next adventure of attending college in the East, where I currently attend Columbia University in New York City.

Lick may not have been the perfect social environment for someone like me, but there is no place I would have rather have gone to school. From my perspective, it offered the perfect follow-up to EB. Growing up at EB instilled in me a multi-cultural worldview that I now consider the most integral part of my personal philosophy. EB’s bilingual structure, complete with two parallel educational tracks, not only taught me to speak French fluently but also to approach the world from different angles. I was constantly in contact with people of different cultural backgrounds, from the parents of my French, Indian, and Brazilian friends to my teachers who came from places as far away as the Ivory Coast. Lick has a similar respect for cultures and perspectives. Lick is also well-known for its technical arts program, which attracts artistic, creative faculty to teach not only the shop classes but also the English, History, and Math classes. At EB, the emphasis was on language for self-expression. At Lick, while I spent
ample time writing essays and editing the Paper Tiger, the school newspaper, I also discovered the satisfaction of welding and working in the darkroom. I discovered a new, more visual and tactile perspective of the world.

As I progress in my education, I find myself at yet another school that values the well-rounded, world-exposed student: Columbia. Our core curriculum, one of the most traditional, inclusive, and oldest in the nation, requires that students study everything from non-western cultures to the visual arts and music to philosophy. EB, in addition
to my family, have raised me to appreciate all these things and, in fact, to appreciate everything. I think that my pre-collegiate education has made me the ever-interested, open-minded, critical thinking person that I hope I am today. But I still have a lot more to learn.
Back