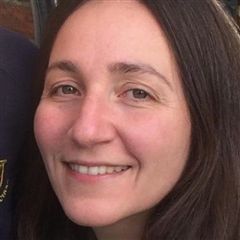 Graduating Class: 1992
Current Position: Lecturer in International Relations at University of Reading
Current Location: Oxford, UK
Education / School 1: UC Berkeley, Georgetown University, University of Oxford
I have always valued the education I got at EB for a variety of reasons—its well-roundedness, the small classes, the excellent and dedicated faculty, the multiculturalism, and the friendships I made there (which are still among my best). But that appreciation jumped
to a new level recently, as I can honestly say that I would not have my current job if it were not for those nine years on Heinz Street. Nearly four months ago, I moved to Conakry, the capital of the tiny francophone West African country of Guinea, to work with the
American Refugee Committee. Despite being part of a region that has become synonymous in the press with brutal civil wars, few have heard of it. I had to specify countless times, “Not Equatorial, not Bissau, not even close to Papua New—just Guinea.”

Being bilingual is useful in almost any context. Throughout my academic and professional career since EB, my ability to speak a second language fluently has been an asset—whether because it is an explicit requirement or because it is often regarded as a mark of
being well-educated and capable. I completed a French minor (along with an English major) at UC Berkeley before moving to New York where I worked for the Whitney Museum of American Art. A second language was not mandatory for that job, but it was a distinct
advantage in the application process. And later, when I applied to graduate school at Georgetown University’s School of Foreign Service, foreign language proficiency was a minimum requirement.

But in my current job with ARC, it was French specifically that was the deal-breaker. Having just graduated from Georgetown with my masters in International Relations and a focus on Conflict Management, I was not the only one of my classmates looking for
field jobs overseas. Many are just as qualified as I am to fulfill the duties of this position and manage the demands of living in one
of the poorest countries in the world and one that is not only surrounded by war-torn countries, but characterized by a slew of its
own structural instabilities. But my classmates don’t speak French. Even though the refugees I work with and for here are mostly English-speaking (from Liberia and Sierra Leone), regular office business, liaising with other organizations, and daily life are all
conducted in French. Indeed, if it weren’t for French, half the African continent would be closed to me, at least in terms of living
and working. For someone who wants to spend their career preventing and resolving conflicts, providing humanitarian assistance in war-torn countries, and linking relief to longer-term development, to be monolingual would be a major disadvantage. In a way, it is
the education I received at EB that has allowed me make my dreams come true.

Additionally, the early start and the combination of linguistic and cultural education I got at EB have proven to be big advantages
in a francophone country. Compared to people here who only began studying French in high school or college, I find it easier to understand technical language, slang, jokes, and different accents. While these may seem like minor issues, they can mean the
difference between actively contributing and just keeping up in a meeting, and between having a social life and just sticking to the
anglophone expatriate community. While French is what got me here in the first place, it is partly EB that has made my experiences here as rich and dynamic as they are. And that is true not only for Guinea (not Equatorial, not Bissau...), but for places I’ve been to, people I’ve met, and things I’ve done throughout my life.
Back