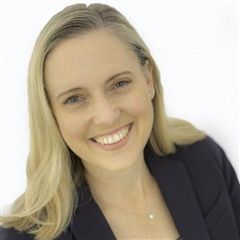 Graduating Class: 1982
Current Position: Economics teacher at Wellesley College
Education / School 1: Harvard, MIT
Why enroll your child in a bilingual school if you have no ties to the French language or culture? For my parents, the initial motivation was to escape public schools in the early 1970s that were a bit too experimental even for their hippie sensibilities—their daughter was going to learn to read in the first grade, not “when she felt like it”! They joined the group of parents that
had founded EB, sanding desks in the summer of 1977 before enrolling me in 1st grade and my brother in pre-K.

While the exposure to French might have initially seemed like a
nice bonus, we soon realized that it was much more. EB attracted
a refreshingly diverse student body, and I quickly became best
friends with one student who had a French mother and another whose parents had emigrated from India. One of the highlights of my childhood was a month-long stay at the home of my friend’s grandparents in the French countryside. We passed the days playing with my friend’s French cousins, being taught how to
knit by her grandmother, walking into the small town to buy fresh bread and chocolate for our afternoon snack, and watching a TV game show, Les Chiffres et Les Lettres. To this day, I am happy to
count these EB friends among my very best friends in the world.

After graduating from EB, I had fewer occasions to use my French for a time, until my brother and I became counselors at a bilingual summer camp in Oakland. For seven summers, we
played games and sang songs in French with our young charges by day, and by night hung out with the counselors from France and Belgium, introducing them to baseball and bowling and
being introduced to the fine European pastime of hanging out at cafés.

My life since then has taken me away from the Bay Area. I discovered in college that the field of economics offers a uniquely valuable perspective for thinking about the public policy
issues that have interested me since my family discussed them around the dinner table in my childhood. I followed up an undergraduate degree in economics from Harvard with a
Ph.D. in the subject from MIT, and am now teaching economics at Wellesley College and living in a Boston suburb with my husband, an environmental policy analyst, and our 10-month-old son.

As the years have passed, I have to look a bit harder for the French connection in my life, but it remains. It’s there when I watch a French movie without subtitles, when I travel to France and feel right at home, when I sing French songs to my son.
It’s there when I strike up conversations with French tourists just to get a chance to use the language – something I used to shudder at when my mother encouraged me to do it as a child!

I am grateful to EB for all of this, but even more so for providing a
nurturing environment that helped me to gain the self-confidence, academic skills, and love of learning that have formed a critical foundation for all of my endeavors.
Back