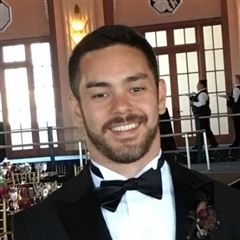 Graduating Class: 2001
Current Position: Full-stack blockchain developer at Peepeth
Current Location: San Francisco Bay Area, CA
Education / School 1: Middlebury College
Eleven years at École Bilingue...where to begin! The memories
come flooding back—my cahier de texte, French geometry, 5th grade trip to France, recess, MC Solaar—in short, I wish I were still there! My relatively carefree days spent at EB have had a
much greater impact on my life than I could have imagined in those days of old. Lacking perspective, I had little idea of the value of such an education. It wasn’t until middle school and
especially high school, when I was removed from the EB environment, that I began to realize how well my bilingual education could serve me.

During the summer after seventh grade my dad and I went on what was to be the first of several international trips, this one to Australia and New Zealand. This was one of my first opportunities to put my French to full use—many French-speaking New Caledonians had also decided to summer there, and it was most rewarding to strike up a conversation while rumbling through the outback or heli-skiing on the Tazman glacier.

More important than a language, EB teaches cultural awareness. Going to school in such an environment places one right in the middle of an international environment. This not only teaches awareness, but also, to me at least, sparked a desire to seek out
more cultural understanding.

The summer after 8th grade, I asked my Dad to bring me to Africa. I had had a passion with that continent which only
grew stronger upon hearing teachers Mme Marie and Mme Bérard relate their travels. We experienced the streets of Nairobi, went on a camping safari, and even summited Kilimanjaro.

Things really took off from there. I developed a passion for
mountaineering, and after my freshman year at CPS, my dad and I traveled to Russia, this time to summit Elbrus, Europe’s highest summit. Neither of us made it—we both got very sick from contaminated food at a high camp. Nonetheless, I had the
opportunity to explore small rural towns near the Georgian border, which proved very rewarding.

In training for the climb, I had also taken up cycling as my cardio workout. When I got back from that ill-fated trip I decided to pursue the sport somewhat seriously, and even do a “century”,
a hundred-mile, one-day biking event. I chose a 200 kms (124-miles) “randonnée” (a French tradition, of course) as my first long distance event, and completed it in a lengthy ten and a
half hours. I began putting in more and more time on the bike, and, in the spring of my sophomore year, completed two double-centuries (200 miles), and randonnées of 300 kms and 400 kms
(200 and 260 miles respectively), the latter of which I completed in about 19 continuous hours on the bike. The summer after sophomore year was largely spent training, but I took a month off to backpack in the Yukon Territories in Canada for a month with the National Outdoor Leadership School (NOLS). This kept my heart rate low, and when I got back, started training more than ever on the bike. My goal was to complete the Furnace Creek 508, a non-stop 508-mile race through the deserts of California and Death Valley. I realized that goal this October (I’m currently a junior), and became the youngest to ever finish this race at age 16. I placed 19th out of about 50 male racers, in a time of 42 hours.

Five months later, I’m still trying to get back on the bike! I’ve taken an extended break and am not racing this spring, but I plan to race “The 508” again next October, and possibly come close to winning. That would be training for Race Across America (RAAM), a televised 3000-mile transcontinental race, which I hope to become the youngest to finish, the summer after my senior year. As for training, I’ve been given the green light from my dad to go on a self- directed bike touring / photographic expedition by myself through France and Italy this summer, to put to use the skills I’ve learned at EB and NOLS as well as my previous travel, biking, and photography experience.

College is looming on the horizon, but before spending another 4 or more years in school I plan to take a year off, to (you guessed it) travel, photograph, and maybe even write throughout Eastern Europe, the Middle East, and Southern Asia.

The most concrete skill I took out of EB is of course the French language, which I rarely hesitate to use when given the opportunity to do so. More importantly, however, my EB education has spurred my passion for traveling, has made me culturally aware, and has taught me to seek new challenges. My
education at EB was, I believe, the most life-changing and positive experience I could have had in my early years.